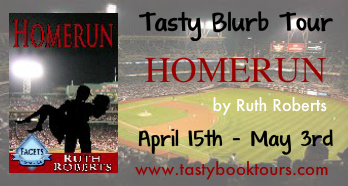 Today I'm very excited to be have Ruth Roberts here with her new release Homerun.
﻿

Cynthiana, beautiful, intelligent, and by all appearances, a spoiled socialite, finds herself as chair of the Inner City Youth League Charity Gala. Her Co-Chair, Roberto Luque, is Major League Baseball’s newest playboy from the Domincan Republic. Far from being in the League of men her parents expect her to choose from, which is just fine with her since she has sworn off playboys. But, as they work together she discovers his devotion to the inner city children and wonders if there is more to him than his playboy reputation. Will she break her no playboy rule long enough to find out?

Roberto fought his way into the Majors. Now, a successful pitcher for the Texas Rangers, he is living the life he always dreamed of. Until he faces off with a bad-tempered, blue-eyed, red head that is not his type. So, why is he drawn to her? The Charity Gala gives him a chance to find out. What he finds beneath that socialite veneer captivates him, heart and soul.

When her powerful father threatens to tear them apart, destroying not only their love, but also Roberto’s hard won career, will he be willing to give it all up for love?

How could she have been talked into this? She was in way over her head. Cynthiana Davenport did not plan fundraiser Gala’s, she attended them. So how is it that she was now head of the planning committee? And for baseball of all things. She didn’t even like baseball, much less know anything about it. So what if her best friend had married a hunky major league baseball player last year. Just because Stacy had to learn about the sport didn’t mean she did. She was going to call her right now and tell her the deal was off. Someone else would have to take her place.

Cynthiana dug her phone out of her purse and was about to hit speed dial when she sighed in resignation and threw it back into her purse. Stacy was seven months pregnant with twins and on total bed rest. She couldn’t back out, Stacy didn’t need that kind of stress. The Gala was only a month away and everything was practically done. It would be a piece of cake. She could do this. Besides, it was only a big party and if there was one thing she was good at it was throwing parties. Sure, this one was a little larger than she was used to but hey, how much trouble could five hundred wealthy people and athletes be?

Not nearly as much trouble as managing her growing feelings for one very gorgeous, very charming baseball player with deep brown eyes and a killer smile who just happened to be her right hand on the planning committee. Roberto Luque. If she could just ignore his adorable dimples she might get through the next few hours. Roberto was a playboy and she didn’t date playboys. Ever. So she would just have to keep her feelings under tight control until the night was over. She had managed to do just that every time they had seen each other over the past year. Admittedly, it had been getting harder and harder, especially since he seemed to be stepping up the charm. A man like Roberto knew very well when a woman was attracted to him, but she was determined not to be one of them. So far she had been safe by provoking some sort of argument with him any time they were together, that usually cooled things down, but she hadn’t been able to do that since they started working together on the Gala. Thankfully they wouldn’t be alone, the rest of the committee would be there too. Which was a good thing since they were meeting at her house. Heaven only knew what would happen if the two of them were alone in a house together. Spontaneous combustion came to mind.

Her two story, red brick house on twenty-five acres in a small Dallas suburb gave her the privacy of having a slice of country while still close to the city. Deciding they would be more comfortable working in the living room she finished laying out the last of the Chinese food boxes on the coffee table. The door bell rang. Refusing to glance in the mirror by the door, she opened it to find Roberto. Just Roberto. It was dangerous to womankind for one man to be so handsome. That mischievous look in his dark eyes, a touch of humor on his full lips, dark tendrils of hair curled on his forehead and at his nape. How is it that the sight of him made her feel light headed? Get a grip girl, he’s only a man.

"Hi Princesa. I brought the wine and the guest lists as you ordered."

"I don’t order, I request." Defensive mode was her method of survival around him. She stepped back and let him in.

Roberto stood just inside and surveyed her house. Lots of windows let in plenty of sunlight. Sheer red curtains over white slatted blinds complemented the white carpeting and black leather sectional with red and white throw pillows scattered over it. Why was it so important that he like her home?

With a smile and a shake of his head Roberto said, "Nice. It suits you. Fiery yet warm. By the way, Jennifer and Raquel won’t be able to make it tonight." He set the wine bottle on the table next to the wine glasses and the manila folder containing the guest lists on the sofa.

So much for her well laid plans. "Why not? We have a lot to do tonight, and why didn’t they call me?" She wanted to stomp her foot like a child. Fortunately, she was able to control that urge. Unfortunately her face felt as hot as stoked fire. Darn, why did she have such pale skin? Was it anger or the thought of being alone with him? Anger, definitely anger.

"Because they called me," Roberto replied. "Between the two of us we can get everything done. Not to worry Princesa, hard work is not hazardous to your health."

"I know that Roberto. Why do you insist on thinking I haven’t worked a day in my life?"

The man was impossible. Maybe she’d just send him home and do all the work herself. The idea had merit. She plopped down on the sofa as far away from him as possible and still reach the food. She ignored his knowing smile and shake of his head as she picked up a box of her favorite sweet and sour pork. Who cared if he thought she was a chicken for wanting to keep distance between them.

He poured them each a glass of wine and sat down next to her. He scooted closer to her as he handed her a glass. Now he seemed to ignore her scowl as he took a sip of wine, set down his glass and chose his own box.

"You’re always starving," she said a few bites later, "it must be some sort of rule for athletes that they can eat whatever they want and still look great."

"You think I look great?"

Darn! Why did she have to say something to make him smile? There were those dimples again. Heat started creeping up her neck and face, the telltale signs of a blush coming on. Be more careful with your words!

"All athletes look great, it’s not just you. Don’t let your head get too big, if it gets any bigger we won’t both fit on the sofa, I’ll find myself on the floor."

He put his arm around her shoulders and pulled her to his side. "Don’t worry, there will always be a place for you by my side."

His teasing tone turned serious causing her to look up at him. He stared down at her, his expression unreadable. Was he joking? Was he serious? She couldn’t tell and her heart was doing funny little flip flops, his fingers stroking seductively up and down her arm weren’t helping either.

Ruth Roberts has worked in public relations for fifteen years. She lives in Texas with her very own romantic hero of eighteen years, their teenage daughter and their dog, Kimi. Her hobbies are reading romance novels and writing them. Her family says she is addicted to books, in her opinion that’s not a bad addiction to have. You can find her on Facebook or on the web at RuthRobertsRomance.com. You can also email her at ruthrobertsromance@yahoo.com. She loves hearing from fans.

Ruth is having a tour wide giveaway. For your change to win a $5 Amazon Giftcard, simply leave a comment and your email address below and you'll be entered into the giveaway!