Well hello everybody! I know, it's been far to long since I've done this, but since The Right Kind of Wrong is approaching it's first anniversary, here's Harriet and Jamie's first cheeky kiss... 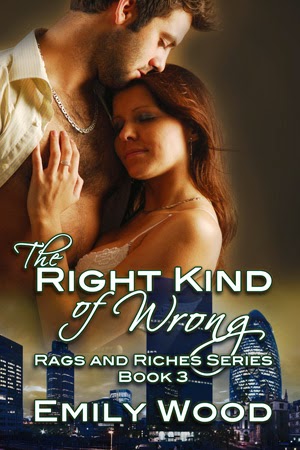 ﻿
Without warning, Jamie brushed his lips lightly against Harriet’s, and she felt a tingling sensation from where he had kissed her right down to the pit of her stomach. Despite her initial shock, she closed her eyes and gave herself to the kiss, swaying into him and hoping to feel his body against hers. But all too quickly he pulled away and stepped back. Harriet gasped and touched her mouth with her fingers, staring at him, willing him to explain himself.
"I’m sorry."
Harriet expected his boyish smile, but instead he frowned and looked at the floor.
"I shouldn’t have done that."

Maybe only someone who’s been behind bars can understand how to set her free.
Fresh out of jail, Jamie Pierce is desperate to change his ways and become a better person. He wants to earn enough money to get out of London for good and live a quiet life somewhere in the country. But then he meets Harriet Jones, a beautiful young fashion designer who is plagued by self-doubt, and suddenly leaving doesn’t seem so simple.
Harriet has spent years trying to win her father’s affection, but time and time again she’s been left feeling that she just isn’t good enough. When she starts to fall for her rough-around-the-edges neighbor, she knows her father would never approve.
It was only meant to be a fling, but maybe the person who seems so wrong for her could be just the kind of person she needs. Can Jamie help Harriet learn to believe in herself, or will she remain trapped in her own prison of self-doubt?

Email ThisBlogThis!Share to TwitterShare to FacebookShare to Pinterest
Labels: #SexySnippets, The Right Kind of Wrong