Trouble in Tinseltown by Aimee Duffy

Everybody say a huge welcome back to Aimee Duffy, sharing her latest series from Harper Impulse. Trouble in Tinseltown is a fabulous read, and the rest of the series is just as addictive. Over to you Aimee... 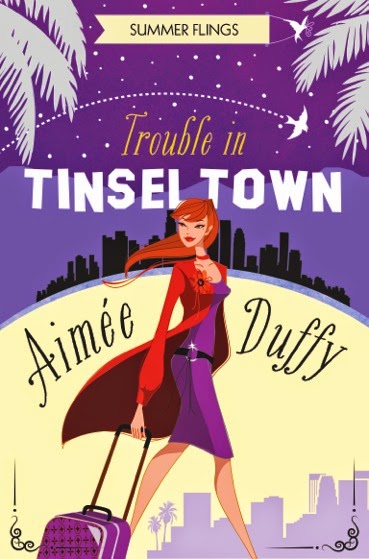 When my editor asked if I wanted to write a series of short stories perfect for the summer months I jumped at the chance! Summer flings is a smexy rom com following Ciara, Gem and Elle’s trip around the world after they graduate from university – oh, and they pick up a very hunky fling or two along the way!


I really enjoyed writing these books, the girls kept getting into lots of mad and hilarious situations without me even having to try to think about it – as a writer I adore it when that happens. The characters practically dictated the books from start to finish, insistent that this was there holiday and they were going to set the pace. My only regret is not being able to jump inside the pages and travel with them.


Huge thank you to Emily for having me today!

Armed with a degree from Oxford that she doesn’t have a clue what to do with, Ciara Bree convinces her two best friends, Elle and Gem to spend their first summer of freedom backpacking across the globe. Now it’s time to shop, sunbathe, think about boys for a change, and party hard…


The girls hit Tinseltown for a few days of shopping, star spotting, and even a movie premiere!


But their plan to sneak into an exclusive celeb party in West Hollywood backfires. Elle’s gorgeous older cousin, Zack, is called to the rescue and despite knowing she should stay away, Ciara just can’t seem to resist him.


The ideal summer treat for those relaxing days soaking up the sun!

Sneak Peak – The Morning after

His grin was just like it had been last night, or this morning, when she’d told him she didn’t scream ever during sex and he’d proved her so wrong.


Ruthlessly, she pushed the memory away and pressed on, refusing to be distracted by the thrum in her blood that insisted she take him up on his offer. Right Now. ‘I’m not looking for a relationship, or to get involved with someone I know. I’m not a stayer.’


He just stared at her with amusement glittering in his eyes. That wasn’t the least bit insulting, she thought wryly.


‘So what I’m trying to say was that last night was a mistake. I’m sorry.’


‘You really believe that, don’t you?’ he asked, placing the tray down then putting her coffee on it. ‘You really think that last night was a one off.’


He grabbed her hips, pulling her closer and her heart took off full speed. ‘It was. It has to be.’ She tried to reply firmly.


His lips brushed her ear and she shivered. ‘You’re wrong. Last night wasn’t a mistake, and this isn’t over – it’s just on hold until you realise that.’


She was about to protest but he kissed her first and she was gone as thoroughly as she had been the night before.

All my life I’ve been dreaming up stories. My mum said when I was little I used to make all the My Little Pony figurines talk to each other, and even fall in love. Later, it was Barbie and Ken. In my teens, I played matchmaker with my friends at school.


When I wasn’t creating imaginary scenarios, I had my nose stuck in books, reading across genres and there was one thing I loved more than the escapism—the fact a story can touch me so deeply, like I was experiencing everything along with my characters. I knew from early on this was something I wanted to do for others.


Fast forward a few years, and the dream almost got lost in real life, but I still couldn’t shake it completely. Now I write sizzling romance with the hope of making my readers’ hearts race like they are falling in love for the first time.