Collared for a Night by Susan Arden 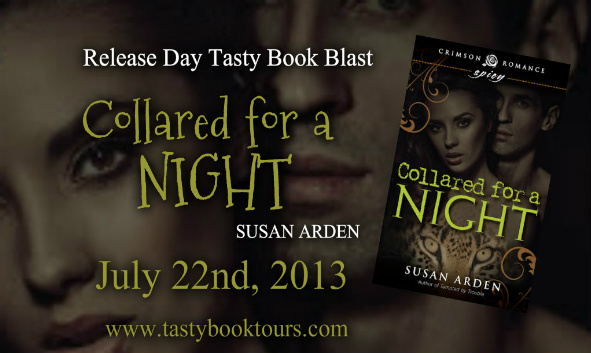 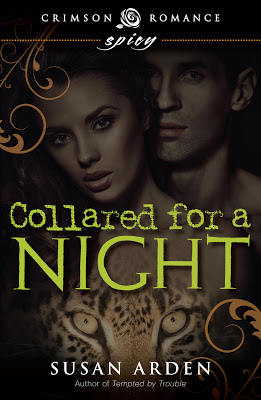 All it takes is one mistake to be marked. One bite, she crosses a line...into forever.

Diana Hambre's body is blazing. For days this leopardess shifter has spun through a body-searing heat cycle. Alone. Her senses reel when Shawn Barclay, her boss, walks into her reserved room at the Downtown Den, a stud club for shifters. He gives Diana a choice: spend the evening with him, give into his every desire, and she'll find out what it means to quench her heat-crazed thirst—or try her luck with a stranger, one of the club bangers.

Shawn hates when his back is against the wall. One sip of Diana’s pheromone-laced scent is enough to force his alpha hand. The tables have turned and it's Diana's back he wants up against a wall or any other surface for that matter.

As the moon rises toward midnight, Shawn and Diana come to understand the difference between sex and bonding. For a night, neither of them resist their primal instincts, blindly giving into carnal desire. Her wild nature fights being subdued and she risks spontaneously shifting without warning.

Now, bearing Shawn's bite marks, she can’t simply walk away from him; not when he has the means to teach her to harness her leopardess nature. Shawn accepts the challenge of training Diana to control her untamed cravings. Employing every method available in and out of the bedroom, he discovers he's on the verge of ensnaring himself in the process.

"I love to laugh. More than anything in the world, humor is food for the spirit."

She teased and nipped at his sweet spot, underneath his head, licking and sucking, and pushed past his dominance.

"Suck me harder, sweetheart." Shawn’s voice was an inhuman, hoarse whisper. He stopped tonguing her pussy and held her head. He fucked her mouth, pumping and thrusting across her lips.

She adored the feel of his cock in her mouth and did as he instructed. Diana ran her claws across his flesh.

He followed suit, rasping the tips of his nails over her skin. Shivers broke out from the tiny pain-pleasure scratches over her skin. His muscles quivered around her. His scent filled her mouth and head. She could savor him without fear and, at this moment, had to taste his orgasm. A savage hunger tore into her.

Previously, her mouth had been a safe spot on her body where an alpha’s semen couldn’t cross her physical barrier. Yet now, her whole body convulsed and shifted, a sign of error in her judgment. This man was different. Her leopardess nature pushed outward. She told herself she must absorb his musky scent and taste if only to recognize his marking in the world beyond this room. He pulled out of her mouth and her leopardess mind quaked in frustration, on the edge of claiming her mate.

"No," she roared. Her pelt rippled and she shook, flexing feline muscles. Spontaneously she’d let go and shifted. The experience was more than exhilarating. On all fours, she crouched next to him on the futon. Her long tail slapped against the wall. Never had shifting felt this powerful. She licked his face, stared at him from behind twitching whiskers, and she flicked her tail, snapping his leg.

"Diana, reel in your leopardess nature. Come back to me." His whispered command eased her nature.

"Now, sweetheart." He rubbed his thumb on the ridge between her eyes, then petted the side of her cheek. She could feel his essence without responding to the content of his words. Deep within her, primitive instinct was a force that drove her, and she responded by purring and rubbing up against him, marking her scent over him.

The scent she released as leopardess would be near impossible for him to resist. She dropped beside him, blinking, and lowered her lids. For him, she began the process of shifting back. She hissed, and then moaned, curling up next to him.

"I’m sorry," she said, opening her eyes and contemplating him. This was the first time she had shifted in front of an alpha male for over a year. Was Shawn taken back at her lack of control?

Her fur receded, emitting sparks of energy over the length of her skin, tightening and smoothing into her human form. Her claws got caught in the futon. She tugged each curved spike free, then focused and steadied her nature. "I understand if we shift during sex, things will get away from us."