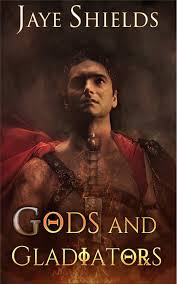 
When the Olympian Gods contest that the Romans aren’t nearly as mighty as they think they are, Ares, the God of War, is the first one to prove it by spending a month as a Roman. Ares arrives in Rome as a Gladiator, thrilled to have a human body in which to kick some ass. His first chance at Gladiator glory is to reenact the slaughter of the Sabines but when Ares spots a beautiful slave with eyes blazing with courage, he refuses to tear through the defenseless prisoners.

Eirana of the Gauls is only one of hundreds of women taken as slaves by the Romans. Weaponless and starved for days, she’s forced into the coliseum to be symbolically massacred. She’s seen the infamous Gladiators in action enough to know there will be no mercy. But then something incredible happens, one Gladiator chooses to protect the defenseless women. He claims to be a God, but he bleeds just like a human.

Eirana is the most incredible being Ares has ever seen. With only a month in the human realm, the God refuses to leave until knowing she is safe. But if he can conquer the Romans keeping her as a slave, will his heart still be able to let her go?

I love ancient Rome, I love mythology, and Jaye managed to bring the two together in an intense, thrilling romance that kept me captivated from the first page. This was one of those rare books where I had absolutely no idea what was going to happen next right up until the very last page. The romance that blossoms between Ares and Eirana was both sweet and sensual, and totally addictive. Jaye managed to create a true hero who leapt right off the page, and a heroine who was brave, and who’s back story really plucked away at the heart strings. A really great book, I loved everything about this. More please Jaye!
Posted by Em at 07:00