A Love Discovered by Ella Jade 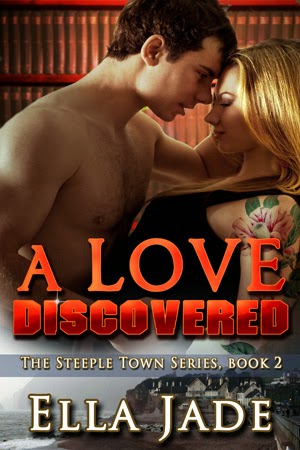 When they met, love was the last thing they were looking to discover…

Local bar owner Cali Tate has always been trendy, easy-going, and impulsive. She isn't afraid to take chances, but her carefree attitude may have put her restaurant in jeopardy. Her failing business is beginning to take a toll on her, both mentally and financially. When her best friend asks her to do a favor and take some books to the town's reclusive professor Cali welcomes the distraction. To her surprise, the sexy professor is nothing like she had pictured him.

Dr. Carter Stavros wants to be left alone. He's set in his ways and doesn't want to be bothered with the outside world. Wanting to escape the demons of his recent past, he moved to Steeple, taking a sabbatical from his teaching job to write a book. He wasn't prepared for the spunky, persistent bar owner to invade his life. But the more she pushes, the more intrigued he becomes.

Neither one of them expected to find any common ground, much less fall in love. What happens when an OCD professor collides with a risk-taking woman who won't take 'no' for an answer?

I'm excited to announce the release of A Love Discovered. If you've read A Love Stolen you've met Cali. See how the sassy bar owner discovers love with a sexy, domineering professor. 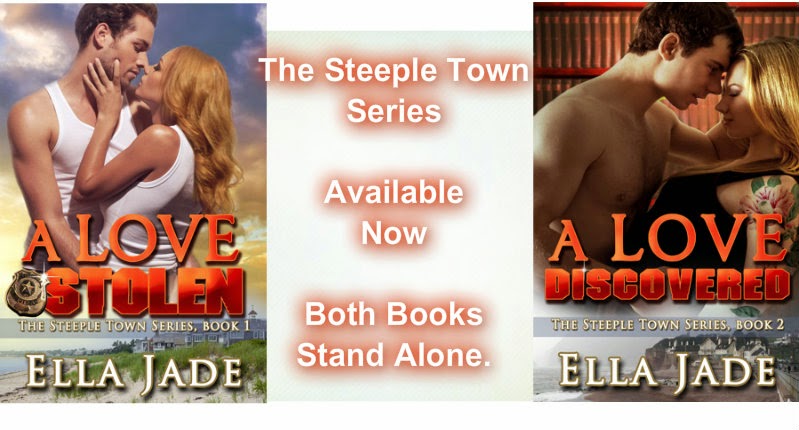 After lunch, another hour of conversation, and a long swim, Cali lounged on the chair by the pool. Her shoulder-length blonde hair dried naturally and curled at the ends. Carter watched as she closed her eyes and enjoyed the afternoon sun. Her tanned skin glistened with sunscreen and her tiny bikini was almost dry. He wondered how many hours of intense workouts created a body like hers.

"Are you admiring me again?" she asked with her eyes still closed.

"How many tattoos do you have?"

As improper as it was, he couldn't take his gaze away from her right nipple. The evidence straining against her damp bikini indicated a piercing of some sort. He'd never been more fascinated by anyone before. Throughout the years he'd seen quite a few attractive young women on campus, but he never acted on impulse when it came to students, no matter how tempting. Cali wasn't a student. She was a quirky, attractive woman who was very much in touch with her sexuality. She turned him on. He wanted to explore with her.

He sat on the edge of the lounge chair, taking her right ankle into his hand. "Here." He outlined the small butterfly that permanently marked her skin.

"That's one." She opened her eyes when he trailed his hand up her leg and to her hip.

It had been years since he had pursued a woman. He'd gotten married when he was twenty-four and stayed faithful through the whole fourteen years of that turbulent relationship.

"Two." He swept his fingers over the pink-and-purple-colored rose petals sprinkled along her hip.

He took her hand in his and examined more rose petals on the inside of her wrist. "Do they hold significance?" He traced his fingertips over the tattoo, indulging in her smooth skin beneath his touch. The way her flesh prickled in response instigated his actions.

"I like roses." She sat up, placed her legs across his lap, and leaned closer to his face. "My mother had the most beautiful rose bushes in our backyard." She pushed her hair to the side and tilted her neck. "Four."

"It's exquisite," he mumbled as he took in the ivy that started at her collarbone and flowed down the back of her shoulder blade.

"I wouldn't have pegged you for a man who likes ink on his woman."

"I'm not usually." He ran his thumb from the start of the tattoo to where it ended on her back. He wanted to feel every inch of her forbidden flesh. She shivered when he stopped. "It goes back to those boundaries you don't have."

Reaching out, she placed her palm on his cheek, directing him closer to her lips. "The question is…" She brushed her mouth against his chin. "Do you have enough for both of us?"

Enter for your chance to win an eBook copy of Book One in the series. A Love Stolen...

Can time forgive the mistakes of the past?

After a six year absence, Lila Crofton has returned to her hometown of Steeple to bury her father. Hopefully she can avoid Trevor Matheson, her ex-boyfriend, long enough to take care of her business and get back to the city. With everything she's dealing with the last thing she needs is to run into the man who betrayed her and broke her heart.

Recently divorced Sheriff Trevor Matheson is picking up the pieces of his life. When his high school sweetheart, Lila, returns to Steeple, Trevor sees it as a sign. He's getting over a failed marriage and she's grieving the loss of her dad. They need one another. The timing couldn't be more perfect. But can they move past the events that tore them apart six years ago?

Is there a second chance in their future, or is their stolen love gone forever?

a Rafflecopter giveaway
Posted by Em at 07:00