Yep, that's right! It's here! All three Rags and Riches books are now available in a box set, and guess what? You can grab the series now for a special discounted release price of just 99c! 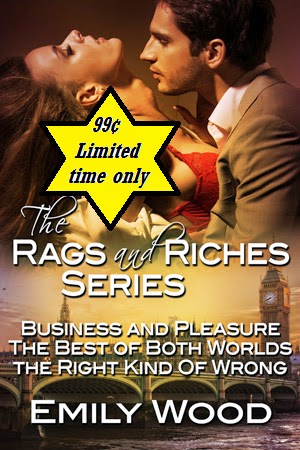 Sometimes you can find love in the most unexpected places.

Sparks fly as three couples who seem all wrong for each other tackle the obstacles thrown in their way in search of true love. Opposites attract, yet those opposites might actually have far more in common than they think. Can social divisions and personal barriers be overcome in order to find a happily ever after together?

Business and Pleasure:
When sexy, rich Lawrence Russo asks Mia to come and work for him in Italy for two weeks, she jumps at the chance. After all, it beats pole dancing, and the salary he offers her is practically obscene. A relationship quickly begins to develop between the two, but Mia can't help but wonder if Lawrence's feelings for her are genuine or if he feels he's just paying for a service.

The Best of Both Worlds:
Melissa Morgan seems to have it all—her modeling career is taking off and she's engaged to one of the most eligible bachelors in London. But when she finds Jonathan cheating on her again, she finds solace in the arms of Riley, a sexy bar owner trying to recover from the heartbreak of his last relationship. Melissa shouldn't even want Riley, but she can't seem to stay away, especially when she finds in him everything that's missing in her relationship with Jonathan.

The Right Kind of Wrong:
Harriet Jones has spent years trying to win her father's affection, but time and time again she's been left feeling that she just isn't good enough. When she starts to fall for her rough-around-the-edges neighbor she knows her father would never approve. All he will see is man who was just released from jail, not a man who's determined to turn his life around.