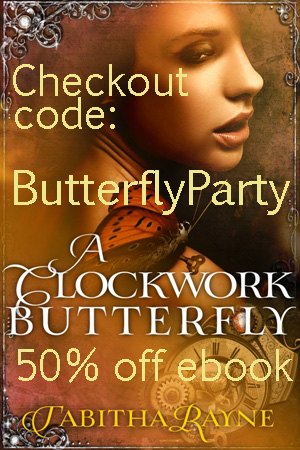 "It’s my party and I’ll make it last two weeks if I want to!"

Hop on over for giveaways and promos…

Torn apart by the duty that brought them together, Lena and Angelo must find a way back to each other. But even if Angelo manages to escape, he doesn't know where to find Lena. Will following the path of the clockwork butterfly lead him to his true love?

Lena picked up the copper butterfly carefully in her fingertips. It was exquisite, and she never tired of studying Angelo’s craftsmanship. It gently, as if it were real, flapped its wings to reveal a new delicate carving on them.

"What’s this?" She sat up, tucking her legs underneath her, and tried to coax them open again. Angelo was smiling beside her.
"Touch the proboscis." He motioned and Lena reached out to the feathery spiral. As her fingertip made contact, the wings opened again and rested there for her to see the new artwork. In the most intricate script were carved the words I love you.

Lena didn’t quite know what to do, say, or think until Angelo lifted the butterfly from her and tossed it up in the air, then pushed her on to her back, showering her with ferocious kisses. She watched the tiny creature flutter this way and that around the room while her body melted into Angelo’s embrace.

"I want to eat you up, ravish you, and come inside you," said Angelo into her peaking flesh. When he was working her with his agile tongue, her entire skin became erogenous and she could barely think for the pleasure. Stars twinkled and burst wherever he kissed and Lena wriggled as his teeth joined in, raking her flesh and arousing every part of her.
Use the code ButterflyParty at the checkout to get a 50% discount on the ebook - 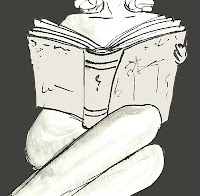 Her short stories, published and upcoming, are included in anthologies from Xcite, Oysters & Chocolate, Cleis, Ravenous Romance, Mischief, and House of Erotica. She has two stand alone titles from Beachwalk Press.

A Clockwork Butterfly is out now.