Once Upon a Twist by Aimee Duffy and Michelle Smart, Interview & Spotlight 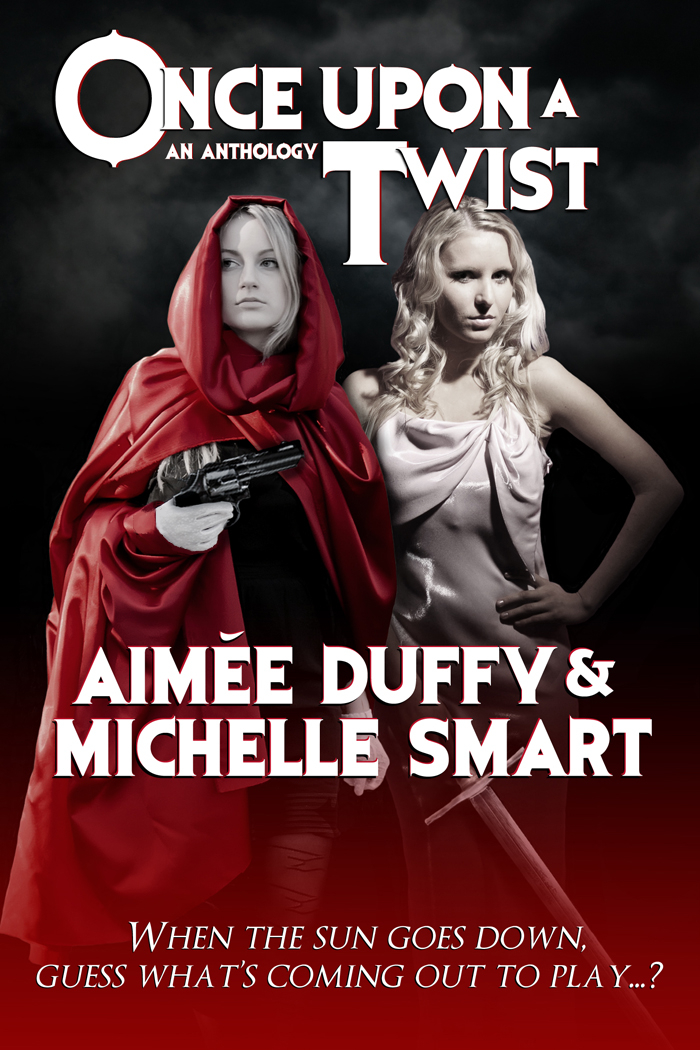 
Once upon a time in a land far, far away, the creatures are coming...


In a land run by misogynists, where fair maidens are deemed liable to fall in a dead faint at the sight of blood, Prince Charming is worried – the creatures that have destroyed their neighboring kingdoms are coming for them. He judges it imperative to get all the females to safety, but first he needs to break the enchantment enslaving his One True Love to her hateful home. Oh, and there’s the small matter of the Ball to get through too.


But when the creatures reach them ahead of their expected time, all plans are foregone. Can Ella break her wicked stepmother’s enchantment? Can she save her handsome Prince and the kingdom before midnight strikes? And can she show his soldiers what it really means to kick  a monster’s butt? The clock is ticking…


Many, many years later…


When Ruby visits her grandmother in the deep, dark forest, she stumbles into a nightmare. Her grandma’s been attacked by a wolf-like creature, and an ancient disease that turned people into monsters is back… and so is the cold-hearted ex she walked out on a year ago.


Now she has to either accept Jeremy’s help or face becoming a monster herself. Fighting alongside the man she once loved isn’t easy, especially when she discovers there’s more to Jeremy than the cheating bastard she took him for.


As they fight to survive the disease and save those they love, can they keep from falling for each other all over again?

"She murdered my father – I can’t prove it but I know it was Christell who put the poisonous spider in his bed. If she could, she would kill me too but my fairy godmother put her own enchantment on me that stops Christell or my stepsisters from killing me. It doesn’t stop them beating me when the mood takes them, but it is impossible for them to decapitate me or remove a limb or stop my heart from beating."


"Why doesn’t your fairy godmother break the enchantment?"


"Ha!" Ella rolled her eyes and heaved herself up. "I haven’t seen her since my father’s funeral. She’s elderly and very scatty."


James’s easy-going smile had vanished. His brow had furrowed and he stared at her for long moments before speaking. "Christell’s taking an awful risk letting you into the forest every day."


"Like most of the humans in this land, she avoids the forest." She dragged a finger along his stubbly cheek, tracing the long scar that ran along it, a permanent reminder of the war he had been fighting in for King and Country. "But you are braver than most humans."


Darkness clouded his eyes. "I wish you had told me before… Ella, we need to find a way to break the enchantment."


"Until my fairy godmother shows up, there is no way. Christell’s magic is too powerful and personal for an unconnected sorcerer to break it."


"It’s not safe for you here," he bit out. "I wanted to marry you and take you as far away as I could. It’s not safe here for anyone."


"Where are you going?" she asked.


"To get the gun. Stay there," he added when he heard the water splashing around her.


The splashing stopped, and she didn’t speak. He pulled a small torch from his pocket, clicked the button. Nothing happened. Shaking his head, he considered waiting for the clouds to pass the moon so he could see properly. That could take minutes they didn’t have.


Dropping to his knees, he felt blindly around the ground, but it was like looking for a natural blonde at Hugh Hefner’s. Then again, he’d be able to find Red there—or anywhere—even without the gift of sight. She may still be in the water, but he could remember her lavender scent, remember her silky smooth skin. Remember how his body fired up like it had been injected with a semi-lethal dose of hormones when she was in a ten foot radius.


Without the heat of his body, she must be freezing. He increased the speed of his search, thought about leaving the damn thing. After all he had plenty more at home, what was one shotgun when he had one in every closet? But keeping her alive for the journey back was more important than keeping her warm.


He considered how much to tell her, after all, he’d signed away the right to be honest with anyone, even the rest of the world when the half-dead creatures started attacking in the night. When he realized what had started it all, he had sworn he would put an end to what he helped create, even though opening his mouth meant he risked jail. Or worse, the other person’s death.

Interview with the authors

Hello ladies, thanks so much for stopping by today, so first of tell us about your story!
What was your inspiration for this story?
Michelle: I’ve always loved fairy tales but always loathed the sexism seeping from them – the princess always has to be saved by the gallant prince. I wanted to write a fairy tale that kept all the old magic I remembered as a child but have my princess be totally kick-ass!
Aimee: Michelle set the bar with Glass Slippers & Combat Boots, and inspired me to write a ‘Little Red Riding Hood’ themed story with a twist.
Do you see a little bit of yourself in any of your characters?
Michelle: Ella is beautiful, feisty and does not take crap from anyone – naturally, I modelled her on me! (Aimee butting in – actually, sounds more like me, with exceptions *coughpubichaircough*).
Aimee: Nope, Ruby is much too impulsive and has a short temper. I tend to think things through more and rarely get cross. (Michelle butting in here – I’d say Ruby has my temper!).
Lol!
About how long did it take you to write the story?
Michelle: This is the only book I’ve ever written that was fully formed in my head before I started writing. It took about three weeks and was an absolute blast to write.
Aimee: Felt like ages. But I had to re-write from about half way through.
Did you have any trouble writing it at all?
Michelle: Nope. I loved every second of writing it – and believe me, that has never happened to me before.
Aimee: I had a blast! First and second time around. It was fun to step out of the norm for me and write something completely different.

Tell us a little bit about you as writers
Do you have any kind of writing schedule?
Michelle: Whenever the kids are at school and pretty much every evening.
Aimee: I pretend to. Truth is now I just squeeze writing in when I can.
What is your writing environment like?
Michelle: A sofa, a laptop and a cushion.
Aimee: Disorganised chaos.
Glad it's not just me! And what would your ideal writing environment be like?
Aimee: On the deck of my massive beach house somewhere in the Caribbean, or even Mediterranean. I’m not fussy. Either would do.
Michelle: Ditto. The Seychelles would be fantastic too. (Aimee butting in – oh yeah!)
If you’re ever stuck for an idea, how do you go about finding inspiration?
Michelle: Erm, don’t hate me this has yet to happen for me (I stress the word ‘yet’ because I know perfectly well it will happen to me one day).
Aimee: I have loads of ideas, just not the time to write. But if I get stuck, I usually email Michelle to bounce ideas around. Or Incy. They are my idea gurus.
Did you always want to be a writer?
Michelle: I always wanted to read books! That was all I cared about – lots of lovely books!
Aimee: In my teens yes. As a kid, I wanted to be a vet, then Ally McBeal.
What’s the first thing you can remember writing? (it doesn’t have to be published)
Michelle: A story about my summer holiday when I was about six – I remember how proud I was (I guess this means I always did want to be a writer but I never knew it).
Aimee: One year in primary school (forgotten which) we were doing a project on ancient Egypt. Our teacher thought it would be fun to write a diary of a day in the life of an Egyptian. Of course, I was Cleopatra and made all my servants massage my feat, then I rode a camel through the desert. At night I went for a swim in the Nile. How good a ruler would I have been?
Do you have any advice for new writers?
Michelle: Yes. Stop faffing and write the book. And don’t stop until you get to the end. And if it’s a pile of doggy-do, it doesn’t matter a jot – your next book will be better. I promise.
Aimee: What she said! I’m prone to whining, and Michelle kicks my bum out of it. If it wasn’t for her, I would have quit years ago.

Tell us a little bit about you as people
How do you spend your time when you’re not writing?
Michelle: Reading.
Aimee: What time? (can I say that?)
What’s the best way for you to unwind if you’ve had a hard day?
Michelle: Red wine. Or vodka.
Aimee: Vodka, or a foot message. Double points for both.
What are you currently reading?
Michelle: Victoria Parker’s Princess in the Iron Mask.
Aimee: Lacey Wolfe’s Brookfield Series.
What was the last thing you watched?
Michelle: The Following (bloody brilliant series – cacked myself!).
Aimee: The Vampire Diaries. Mmm Damon…
What, to you, would be a perfect day?
Michelle: Breakfast in bed, followed by the fairies doing ALL the housework while I get on with writing and procrastinating.
Aimee: No work, no drama, no interruptions, so I could get some writing done.
If you could go anywhere in the world where would you go, and why?
Michelle: Canada. I’ve no idea why, it’s just one place I’ve always wanted to go.
Aimee: Just one place? That sucks. Okay, Egypt is at the top of the list. I want to explore—without a tour guide. Fancy coming? (Michelle butting in – no I jolly well don’t!). Awww. It would be fun!
And finally where can my readers find you?
Michelle: Website / Twitter / Facebook / Goodreads
Aimee: Website/Blog / Twitter / Facebook / Goodreads / Pinterest / Google +