The Right Kind Of Wrong is here! 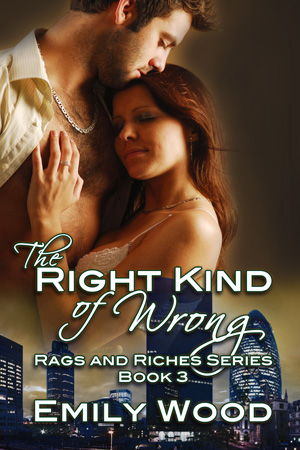 It's finally here! I feel like I've been waiting so long to share The Right Kind of Wrong with you all! I loved writing this and I hope you love reading it just as much! It's the third in the Rags and Riches series, and just so you know, you can get the first book Business and Pleasure for just $0.99 until the end of August! How great is that? So, are you ready to meet Harriet and Jamie? Here goes...

Maybe only someone who's been behind bars can understand how to set her free.
Fresh out of jail, Jamie Pierce is desperate to change his ways and become a better person. He wants to earn enough money to get out of London for good and live a quiet life somewhere in the country. But then he meets Harriet Jones, a beautiful young fashion designer who is plagued by self-doubt, and suddenly leaving doesn't seem so simple.
Harriet has spent years trying to win her father's affection, but time and time again she's been left feeling that she just isn't good enough. When she starts to fall for her rough-around-the-edges neighbor, she knows her father would never approve.
It was only meant to be a fling, but maybe the person who seems so wrong for her could be just the kind of person she needs. Can Jamie help Harriet learn to believe in herself, or will she remain trapped in her own prison of self-doubt?

"I guess that's a hint for me to go." Jamie sighed. "Shame, I was enjoying myself."
He hopped off the stool, and despite the rising panic about her work, Harriet felt a warm glow at his words. "Really?"
"Geez, don't sound so surprised. Why wouldn't I be enjoying myself in the company of a beautiful woman?" Jamie stared down at her with that burning, intense gaze of his.
Harriet squirmed. Years of being criticized had made her unable to take a compliment. "I'm not beautiful."
She broke her gaze away from his, and looked back at her work. Work was what she knew, what she understood, not compliments and looks of strange, gorgeous men whom she had invited into her home with no real idea why.
She felt his fingers under her chin, lifting her face so that she had to look back up at him. Even though she resisted slightly, his fingers were firm.
"You are the most beautiful woman I've ever met," Jamie told her, and he looked so serious.
Harriet wanted to believe it. But she knew she wasn't beautiful.
"Can I kiss you again?" There was a fleeting moment of indecision in his eyes, like maybe he shouldn't, but all Harriet wanted was for him to kiss her again.
"Yes." Her voice was trembling. There were so many reasons why she should have said no. But she wanted this. She wanted Jamie.
His eyes fixed on hers until his soft lips found hers. Harriet savored his gentle kiss this time, marveling at his skill to ignite a passion within her that she wasn't even sure she had. When he pulled away, Harriet was left breathless.
"You seem nervous," Jamie said, taking her hand, which was physically shaking.
"I…I haven't touched a man since my husband and I separated," Harriet admitted.
Jamie's eyebrows shot up in surprise. "You seem too young to have been married already."
"Yes, well, it didn't work out," Harriet said bitterly. She looked away, trying to push down the emotions that threatened to resurface—rejection, abandonment, the feeling of never being good enough. But she was good at controlling the pain by now; she'd been doing it ever since she was a child.
"I'm sorry." The fire between them was in danger of fizzling out as they stood there awkwardly, but then Jamie kissed her hand. "Anybody would be a fool to leave you."
Jamie pulled her closer and started kissing her again. He tasted of beer, and Harriet hated the taste usually, but like with everything else, he made the wrong seem so right, and she loved it.
She kissed him like she couldn't get enough. Boldly, Harriet raised her hands up to cup his face, the beginnings of stubble feeling grainy against her palms. She was more turned on than she could ever remember. Harriet pulled away, suddenly nervous. It wasn't like her to do things like this, and it scared her just how much she wanted it.
"It's okay, we don't have to take this any further. We don't really know each other," Jamie said a little breathlessly.
Harriet tried to hide her disappointment, but she knew he was right, and she wasn't the kind of girl to be this forward.
"But I'm up for it if you are." Jamie's voice was more serious, and his words sent waves of desire through her body.
Given her tendency to overthink things into inaction, she decided to let her body take over. There were a hundred reasons why she shouldn't do this, but she was going to go with the one reason she should—she wanted to.

Email ThisBlogThis!Share to TwitterShare to FacebookShare to Pinterest
Labels: Beachwalk Press, Rags and Riches, The Right Kind of Wrong