The Shadow of Mudflap by Christi Snow & M.F. Smith 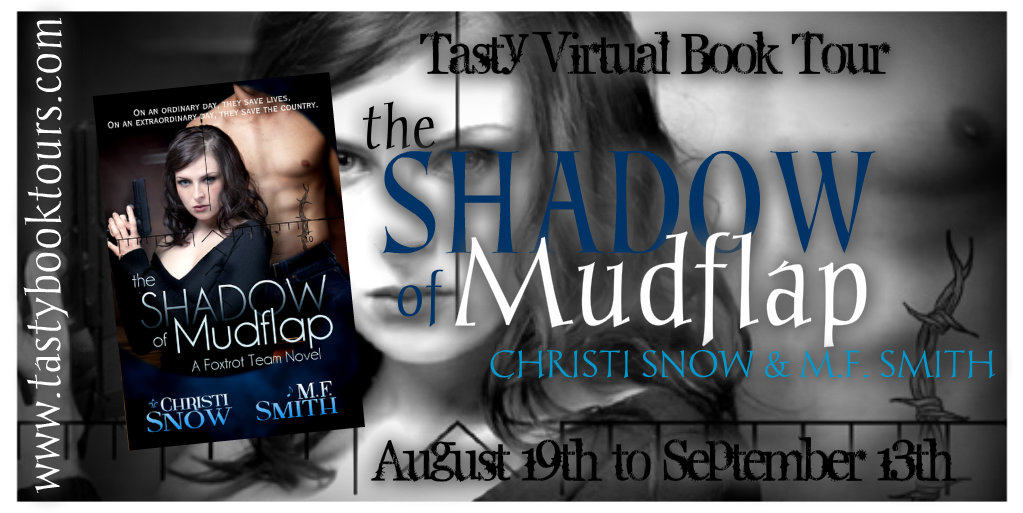 All the proceeds from the sale of this book will go to the Lubbock Red Cross.

To us, first responders are heroes. But for them, risking their lives is a normal, everyday thing. 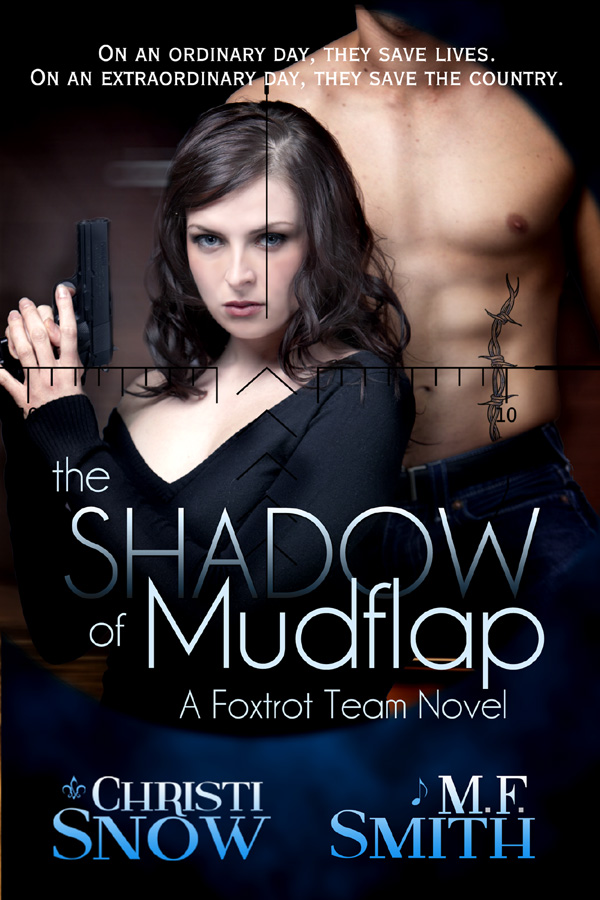 Mudflap:
Born the baby of the family, Mudflap has always had something to prove to emerge out of the shadows of his older siblings. He spent eight years as a Special Ops elite sniper and is now a firefighter. But at his heart, he’s just a normal West Texas good old boy who loves his beer, women and football, until the Department of Defense calls him up to say they need his skills again.


Shanae:
Shanae is a first responder of a different sort. She’s a trauma nurse who works on a medical evacuation helicopter team. But while she lives a life full of adrenaline every day, it’s just a cover for her real life, where she hides in the shadows and is secret agent, Shadowfox for the Lubbock Foxtrot Team (LiFT). She’s living the kind of life that most people think exists only in movies and books.

Working for two different branches of the government, Mudflap and Shanae are in a race against time and the terrorists who threaten the very heart of West Texas life, football. They’re working toward the same goal, but find themselves in a confrontation against each other and the lies they’ve each had to hide behind. Can love win out in the end or will the cost be each other and their very lives?

First responders are heroes every day, but this story tells the tale of when they become even more and find love along the way. The key is for them to stay alive so that they can complete their mission and just maybe live happily ever after.

Because everything about this book is set around a college football season, the book is broken down a bit differently than your normal book usually is done. Instead of chapters, there are weeks (i.e. the weeks of the football season) and there are also sections called Halftime Texting. These feature flirty little exchanges of texts between the hero, Mudflap, and the heroine, Shanae. The following is my favorite Halftime Texting section from the book…


Shanae: I have two cookies: one is a snickerdoodle, one is a chocolate chip.


Shanae: It’s a test. If I offer you one, which one do you take?


Shanae: Good answer, but why?


Mudflap: I have sisters. I know better than to get between a girl and her chocolate.


Mudflap: Did I pass?


Mudflap: You weren’t just teasing about the cookies, right? I really am hungry.

As an avid reader her entire life, Christi Snow always dreamed of writing books that brought to others the kind of joy she felt when she read. But...she never did anything about it besides jot down a few ideas and sparse scenes.

When she turned 41, she decided it was time to go after her dream and started writing. Within four months, she'd written over 150,000 words and hasn't stopped since.

She's found her calling by writing about sexy, alpha heroes and smart, tough heroines falling in love and finding their passion. She's truly living the dream and loving every minute of it.

Her tagline is... Passion and adventure on the road to Happily Ever After. She's loving this adventure!
www.christi-snow.com

Mudflap is a morning show personality for 96.3 KLLL in Lubbock, TX. He’s been on the morning show for seven years and in radio for over ten years. He’s entertained people all over the world, and has helped raise money for many non-profit agencies and charities.

As I started this project, this was the thing I heard over and over again. Mudflap?? That’s the hero’s name?
BUT there was a very good reason behind the name. I promise. In real life, Mudflap (or M.F. Smith) is a radio personality in Lubbock, Texas, and this entire project started out as his baby. Originally, it was really just supposed to be a bit for his radio show, but as we talked more and more about it, we realized this could be a really viable and fun idea to pursue.
The two of us together from the very beginning created the characters and story, but the one thing that never changed was the hero’s name was going to be Mudflap. So I had to figure out a way to make that ridiculous name make sense and work for the book.
I’ll let you decide. Below is an excerpt from THE SHADOW OF MUDFLAP about how MF ended up with his name…
She took a sip of her wine and looked at him appraisingly. "Okay, now it’s your turn to share. Tell me how in the world you got the name Mudflap. It has to be a nickname, right?"
He chuckled mockingly. "Unfortunately, no. It’s the name that my parents gave me on my birth certificate."
"Why? And please tell me that you’re an only child or that they didn’t do the same thing to your brothers and sisters."
His eyes sparkled with amusement although he tried to sound annoyed. "Are you making fun of my name?"
She worked to straighten her grin. "No sir, I would never make fun of a highbrow name like Mudflap." She giggled. "Come on. You have to tell me the story."
He sighed deeply before launching into the story. "I have a brother who’s seven years older than me and then twin sisters who are five years older."
"Ooh, twins run in your family, too. That settles it. We’re never allowed to procreate. We’d end up having a litter," she teased.
His eyes darkened for a moment as he considered her. A shiver of awareness rolled up her spine, but then he continued. "I wasn’t planned. My mom never forgave my dad for getting her pregnant. To add insult to injury, my dad was out hunting when mom went into labor. I’m not sure what the story is, but mom swears the night I was conceived dad was so horny, he got turned on by a mudflap girl. Obviously, that’s not even possible, but I honestly don’t really want to know what the whole story is. All I know is that mom was hormonal and ticked at dad and I paid for it with my name. She’s since forgiven me for being born, but I’m stuck with the name."
Shanae snickered. "That is so wrong." But her lips continued to twitch.
"Tell me about it. I’m the one who’s had to live with the name my whole life."
"Have you ever considered changing it?"
"Yeah, it’s crossed my mind a time or two or hell, one hundred times, but I figure it’s a good reminder to always use birth control."
She full-out guffawed at that. "Oh my God." The snorting continued. "That’s absolutely priceless." She giggled into her hand.
"Oh yeah, just continue to laugh it up. I see how you are."
"I’m sorry, but it really is a great story."

a Rafflecopter giveaway
Posted by Em at 07:00