Give in to Me by Sidda Lee Tate

Hi all and thanks for joining in the celebration of my newest release, Give in to Me, the third book in The Night Series. 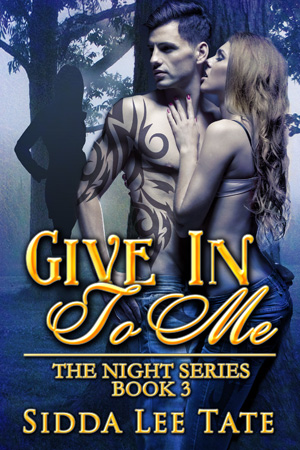 The attraction between Jennica and Scott is undeniable, but will her past show up to ruin it all?

After years of being gone, Scott Sims has returned to his hometown. Life is good. He likes his new job, has reconnected with his sister, and even met a "friend with benefits" at the local bar. He does his best to ignore the flurry of rumors—none of them true—about where he's been and who he's become.

Jennica Moss's last relationship ended badly, leaving her guarded and untrusting. She's new in town, but the local gossips have kept her informed about almost everything. The latest hot topic—Scott Sims, the area's most promising star, the guy who threw his football career away and disappeared for years.

When Scott and Jennica meet, emotions run high. Scott can't resist the urge to get to know her. But Jennica's past threatens to come between them, and Scott can't seem to shake his present. When he broke things off with his last fling, she didn't take it well, and she keeps showing up at the most inopportune moments, making his time with Jennica strained.

Now one, or both, of their lives may be at risk, and Jennica must face the consequences of giving in to her heart and falling in love with Scott.

"Friend of yours?" Scott cut his eyes at her, a single brow raised as they stepped on the sidewalk in front of the Italian restaurant, heading in the direction of her parents' house.

Jennica shook her head even though he was a few steps in front of her and wouldn't see. He walked fast, still hanging on to her hand. He'd punched Troy right in the face. Taken up for her, something no one had ever done. Her heart swelled with appreciation, followed by an anxious panic racing through her veins. In a matter of minutes they would be at her childhood home. There hadn't been much time with him…not what she needed.

He didn't respond, just charged ahead. A man on a mission to drop her and her giant baggage off where he'd found them. A massive lump formed in her throat, blocking her words. She wanted to explain. Tell him about Troy and what he'd done. Let him know why she was so screwed up, but nothing came out.

She glanced at the house with a quick mental note that all the lights were out as he led her by the front walkway and through the manicured grass, not stopping until they were hidden from the streetlights under the carport. Once there, he released her hand and took a few steps, pausing at the edge of the light. The darkness kept her from seeing his expression, but his silhouette against the moonlit night sent thick surges of frenzied tension straight through her, making her chest feel caved.

"You didn't deserve…" he said, in almost a whisper. An angry one. "Is he the reason you think you're screwed up?"

She didn't answer. She didn't need to. He knew. She could tell it in his voice, see it in his stride as he moved toward her. Felt it in his touch as he cupped her face with his hands, lifting it so her tearful sight had no other choice but to look him straight on.

"You can't believe him. You're no one's trash." His eyes seemed to grow darker, pained, fixated on hers. Lost in them, she couldn't look away. Couldn't speak. "You are beautiful…so beautiful it hurts." He bent down, resting his forehead on hers. "I would do anything to have you."

She swallowed hard at the way he'd spoken, slow and determined, as if those words were a concentrated version of everything he'd ever wanted to say. And she understood why. Through all the confusion in her mind, the war with the tug in her chest, the burning need to touch him, she realized, she felt the same way. "Then have me."

Give in to Me, as well as the first two installments of The Night Series can be found on Amazon, Barnes and Noble, and beachwalkpress.com.