If You Want Me by Tara Mills 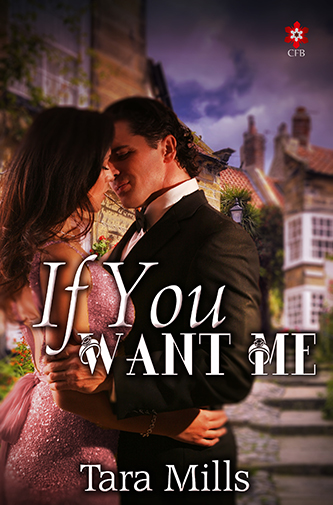 
An irresistible woman. An undeniable proposal.

Even the unthinkable can sound reasonable when you mix alcohol, sexual frustration, and a bachelorette party—especially a bold proposition. Now in the light of day, Naomi’s hung over, horrified, and anxious about facing this complicated man again and the unexplored feelings their encounter brought with it.

She called, he came, but Ryan didn't exactly conquer. Is it too much to hope that Naomi will give him a do-over? She can’t avoid him, not when he’s walking her down the aisle. But who ever heard of a bridesmaid getting cold feet?


On sale NOW at Amazon and Smashwords.


"I really need to get laid," slurred Naomi, sagging drunkenly against her friend Becky.

The entire table fell silent and stared at her. Every squeal over the upcoming honeymoon, every gush over the bridal gown came to a screeching halt.

Becky turned on her, aghast, then shoved Naomi upright in her chair again. "What the hell?" she hissed under her breath.

Naomi scrunched up her brow, perplexed as she weaved and wobbled, trying to focus on all the faces swimming in front of her. The female half of tomorrow’s wedding party. Each of them decked out and tarted up for tonight’s bachelorette blow-out.

"What?" Naomi asked, stupefied by the wide eyes directed her way. "It’s been six months. Six damn months!" she added in a woeful tone. "Who wouldn’t have boner on the brain?"

Two of the women across the table started to laugh behind their hands, but Becky shot to her feet anyway and grabbed Naomi’s arm, hauling her up too.

"Sorry about this." Becky gave Melissa, the bride, a pained and apologetic smile. "I think someone’s had one too many appletinis."

Becky grabbed both purses and slipped them over her arm and dragged Naomi through the crowded club and out to the sidewalk. She caught the eye of the first valet she saw and handed him the ticket. He dashed off to get their car.

"He’s kinda cute," said Naomi, swaying on her heels, her eyes fixed on his back as he disappeared into the night.

Becky gritted her teeth. "Would you stop?"

"So I gather. No alcohol for you tomorrow."

That comment earned a snort. "Who cares about alcohol?"

"It makes you weird."

"Don’t I know it!" Naomi nodded sagely. "Beck, I’m getting the strangest ideas."

"Yeah, I noticed." Their car pulled up and Becky caught hold of Naomi’s upper arm and steered her to the curb. A second valet came forward to open the passenger door while the first man got out and waited for Becky on the driver’s side.

Naomi gave the guy holding her door a sweet smile and cupped his ass before dropping gracelessly into the passenger seat. One of her shoes fell to the pavement next to the car. The guy bent down and picked it up. He had a funny little smile going, and if she wasn’t totally mistaken, he was chuckling.

"Like Cinderella!" Naomi laughed when he handed it to her then stuck her bare foot out the open door at him. "Don’t you want to put it on me?"

Becky snapped at her from the driver’s side, "Naomi! Shut the hell up and let the guy close your door."

Naomi snickered and rolled her eyes at the valet, making a joke of her uptight friend. "Guess it’s time to go."

He closed her in with a nod and a wink. She gave him a little wave that he returned as Becky pulled into traffic.

"Who are you, and what have you done with my friend?" Becky asked, blowing her bangs out of her eyes.

"She’s in here somewhere." Naomi drooped onto her door and squinted at the strobing lights coming right at them. "Did you notice Ryan at dinner earlier tonight?"

Becky glanced sharply at her friend. "Is that what this is all about?"

"Never mind. Let’s get you home, dump a ton of water into you, and put you to bed. You need to be in good shape by tomorrow afternoon or Melissa’s mom is going to kill you, and Melissa is going to be the one handing her the cake knife she’ll use."

Naomi laughed as she pictured the mother-of-the-bride wielding the special cake knife with color coordinated ribbons fluttering from the handle.

"Of course it’s not. Because you’re going home and I’m putting you to bed."

"And whose fault is that?"

Naomi shrugged then drifted off to sleep. She didn’t revive until the car pulled in front of her duplex.

"We’re here." Becky gave her shoulder a shake. "Wake up. Are you awake?"

"Yeah." Naomi blinked and rubbed her temple. "Where’s my purse?"

"On the floor, by your feet." Becky hopped out and walked around the car. "Come on, let’s get you inside."

"I’ve got it." She shoved her shoulder against the door and nearly tumbled out. Luckily Becky was there in time to haul her back before she did a face plant on the driveway. "Thank you."

Beck held out her hand. "Give me your damn purse. There’s no way you’re going to be able to unlock the front door yourself."

Naomi didn’t argue. She took another stab at getting out and managed to close the car door without catching any body parts in it. Weaving on her feet, she clomped up the driveway, her gait even more ridiculous because she was still holding the one shoe the valet had given her at the club.

Becky had already gotten the door open and the inside lights turned on by the time Naomi made it up the three concrete steps, grabbing hold of the wrought iron banister to keep from staggering backwards on her way up.

"Should I brew a pot of coffee?" Becky asked, coming back from putting Naomi’s purse in her room.

Naomi yawned and mussed up her hair, destroying all the hard work she’d put into getting the big silky curls just right earlier that evening. "No, I can manage. Thanks for bringing me home."

Becky eyed her skeptically. "You’re sure? You weren’t yourself tonight."

Naomi covered her eyes with both hands and expelled a big alcohol infused breath. "I know, Beck," she peered out, pouting at her friend. "I’m sorry if I embarrassed you tonight."

"I guess we all have our off days. This was yours. I’ll get over it. It’s not like you do this kind of thing, well ... ever." Becky laughed and came over, giving Naomi a hug goodnight. "So I’ll see you in the morning?"

"Eleven. Don’t forget to set your alarm. Something tells me you’re going to need it."

Becky kissed her on the cheek, uncertainty in her eyes as she peered at Naomi one last time. "You sure I shouldn’t stay?"

"Then I’ll see you in the morning."

Naomi limped to the door and locked it behind her friend. As soon as Becky had backed out of the driveway, Naomi kicked off her lone shoe, raced to her bedroom, and dumped the contents of her purse onto the bedspread.

"Oh yeah!" she cheered. Grabbing the phone, she went immediately to the wedding party contact sheet on her dresser and followed down the line of ushers for Ryan’s name.

He answered after two rings. Even tipsy she could hear the question in his voice. "Naomi?"

"At the bachelor party. Why?"

"Here’s the thing. I know you had a problem with me dating Sam. You were his friend and I created a lot of tension between you two. I get it. But I’m guessing some of that attitude was just bullshit. I caught you."

"Yes, I caught you; watching me, looking at me. I could tell you were covering."

"What’s this all about, Naomi? What’s your point?"

"If you want me, I’m yours. I’m putting on sexy lingerie right now. You have fifteen minutes to get here. You know the address."

Naomi cut the call and eased open the top drawer of her dresser.

Ryan pulled the phone away from his ear and stared at it. Was she serious? Was this for real? Could he even make it in fifteen minutes?

He hadn’t seen Naomi Kendall in months—five long and lonely months, and then …today. He could hardly tear his eyes away from her at the groom’s dinner. She looked incredible; that warm almond skin, those dark brown eyes, all that soft glorious hair. A man could get lost in that hair. They’d barely had a chance to speak to each other but he’d tuned in to her voice. No matter where she was, he heard Naomi over all the rest. Every one of her laughs registered with him. It was excruciating and thrilling at the same time. Then the party broke up and the guys and girls went their separate ways. Disappointed at seeing her climb into a car and drive away, he told himself it was okay, he’d get another shot at her tomorrow.

Talk about being thrown for a loop.

Well, she’d read him right. How the hell did she do that? Clearly, he wasn’t as careful as he thought.

Ryan looked up and found his friends watching him. He closed the fan of cards in his hand. There was only one thing to do. "I fold."