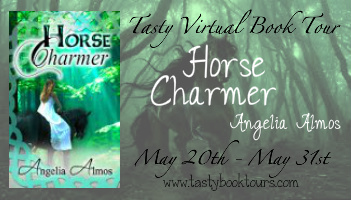 *Horse Charmer is on sale for $.99 (ebook) to celebrate the two year anniversary*

A gifted princess. A special horse. A quest for the truth.

At sixteen years old, Cassia would rather spend her days in the royal stables than in the royal court. But as the eldest child of King Robet and Queen Sarahann she obediently performs her duties as the Princess of Karah.

Her safe world changes forever when her father is murdered in the neighboring kingdom of Vespera. Cassia grapples with his loss as her mother prepares her for her new role as queen. Her first task - she must travel to Vespera to marry a prince she barely knows to fulfill the treaty her father signed just before his death.

Nothing is as simple as it seems with political intrigues and unusual powers shadowing Cassia on her search to find out who killed her father and why. 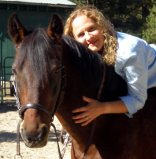 Angelia Almos' love affair with horses began when she was five years old and talked her parents into her first riding lesson. Horses have always been a huge part of her life. The initial idea behind Horse Charmer came to her when she was fourteen. The image of a teenage girl riding her horse through a meadow appeared. Who was this girl? Where was she going? What was she running from? Those questions led to the creation of Horse Charmer.

Interview with the author

Tell us about your story-
What was your inspiration for this story? When I was around fourteen I had this sudden visual of a girl riding a horse without any tack through a meadow with tall grass. I wanted to know where she was going, where she had been, and why. That was the start of HORSE CHARMER for me.

About how long did it take you to write the story? I think HORSE CHARMER took me the longest to write in probably every way possible. I attempted to write it numerous times as a teenager. I then tackled it fresh when I was in a writing class in my early twenties. I finished the first draft in the class. Then did several rewrites over a couple of years as I got lots of advice and feedback. Finally, I felt it was as ready as it could be. So, it was a very long process for HORSE CHARMER to finally be released.

Tell us a little bit about you as a writer-

If you’re ever stuck for an idea, how do you go about finding inspiration? I actually took a class on writing inspiration. It was a screenwriting class through UCLA. :-) I got some great tips. The biggest thing is to watch really good and really bad movies in the genre you want to write in. It's amazing the ideas that can pop up from doing both. I think it also applies to books. I very rarely get ideas from real life though I have a lot of writer friends who do. Generally speaking, I haven't had the problem of not having an idea, my problem is having too many ideas and not knowing which one I should pursue.

Did you always want to be a writer? Yes and no. I started writing books in my teens, but it wasn't until I was older that I wanted to have a career as a writer. My original career goal was to be a professional horse trainer and rider.

What’s the first thing you can remember writing? (it doesn’t have to be published) Fan fic. I read a lot of it and tried my hand as some Star Trek, Babylon 5, and Star Wars fan fic. Though I don't think I ever posted any of my stories.

Tell us a little bit about you as a person-

How do you spend your time when you’re not writing? I'm a full time homeschooling mom. My life mostly revolves around my kids and their schedules. Though I am also a TV, movie, and book addict. Wherever I can devour stories.

What’s the best way for you to unwind if you’ve had a hard day? Crawl in bed and watch some comfort TV like Murder, She Wrote.

What was the last thing you watched? Movie – Just saw the new Star Trek movie which was great. I loved how they took stuff from the original and twisted it and put in the little jokes that only Trekkies get. Kiddos have Scooby Doo on as I'm answering these questions. I think it's the new series on Cartoon Network.

If you could go anywhere in the world where would you go, and why? I have always wanted to visit Ireland. I'm now sure why. It is just a place I've wanted to go since I was a little girl. One day, I will go and ride a horse across the Irish countryside.