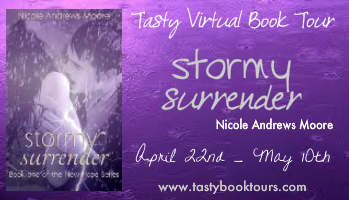 Today I'm very lucky to have Nicole Andrews Moore here with me doing a guest post, but first of all, lets find out a little about her hot new release Stormy Surrender!


Sometimes the life you planned isn’t the one you get to live. Sometimes the pain of the past overshadows the future. And sometimes to start over you have to go back to where it all began. That’s how it was for Joe Masters. That’s how he ended up back in New Hope. And that’s why he was in his thirties and had nothing to show for his life. He needed a complete overhaul, just like his father’s old house. Instead of a fast track, he had slowed down and was on a ten year plan. These days that was more his speed. And as much as he tried to fight the inevitable, he was learning to accept and surrender.

Martha had weathered her fair share of storms in Vermont, was accustomed to the cold, both the chill in the air and the cold shoulder in her marriage, but after the miscarriage she felt like she would never get warm again. So she did the research from the laptop while sitting in front of the fireplace. She knew what she needed when she Googled hope, she just never imagined that it would bring her to New Hope, South Carolina. She never imagined that her husband would trick her into leaving and never follow. She never imagined that a southern storm with all its force and fury could be so destructive. But after the storm, the land is washed clean. It’s perfect for a fresh start, a clean slate, and a new love.


Nicki has lived in Charlotte, North Carolina with her children for the past eleven years and her husband for the past three years.  Her journey has barely begun and she loves every minute of it.  Every day of her life seems to bring new adventures, some bigger, better, shinier and prettier than others.  She's still getting used to that new life smell she's experiencing, a combination of hope, love, and happiness.  (The perfect scents to build a new life on...)

For fun, she spends time with those she cares about, cooks, reads, writes, and especially lives to travel.  The current travel goal: visit every Margaritaville.  Two down!  (Eleven to go?)

In addition to writing on Suddenly Single Journey, Nicki is a contributor for Project Underblog.  Her writing can also be found on Shine, where she is a Shine Parenting Guru and an award winning Yahoo! Contributor on YourWisdom as the relationship and dating expert.  And she has been published by McClatchy News in their syndicated papers.


What inspires the characters? Do you aspire to be like them or are they all a bit of you?
Like most writers, I can honestly say that every character I create is based on me, my personality and my life…or that of someone I know. In Stormy Surrender, I am Martha/Marti. I moved here from the Adirondacks. While I was considered reasonably stylish for that part of the world, I soon discovered that my style and pretty much every bit of me needed an update for Charlotte, North Carolina. It was good for me. I understood Marti from the moment I started writing this story. I have lost babies. I have yearned for love with the right man. I found love right under my nose in the neighbor five doors down. I always wanted to be the best possible version of myself, as long as I didn’t have to feel deprived of food. That’s part of what makes Marti the ideal me. She is also fierier than I am. She says things I only think; that I would never had the courage to say out loud.
Keely is loosely based on my former co-worker and neighbor. She is every bit the woman I portray her to be, super pleasant, a second mother to me, a woman who isn’t afraid to speak her mind, but does it in the nicest possible way. She is filled with boundless energy and the perkiest personality you could ever hope to encounter. The same is true of Laurel. She is a neighbor. Not only is she a neighbor, but she is a neighbor that cooks and bakes and works in the food service industry. She feeds the body and the souls of those she encounters. And she isn’t afraid to speak her mind in her Long Island accent.
It’s no secret by now that my husband, Sam, inspires Joey. This was always supposed to be our story…somewhat fictionalized. I tried to capture his ruggedly handsome good looks. He really is a ginger. He has the temper that goes with it. He can be incredibly sweet, thoughtful, and considerate. He really did leave all the lights on in the house for me. He believes in making memories and souvenirs. He is funny and frustrating and we really do have that much chemistry, for better or worse. And I really couldn’t imagine sharing this life with anyone else. We live it big. We fight for our happy. It fits us just right.
The next installment of this series will be out soon, within the next couple of months. I have other writing commitments to complete in the meantime. Watch for the sequel of Hiding Out next month: Finally Found, filled with characters that come from my imagination, but I know just as well as I do all the rest.
Thank you very much for that Nicole! It's great to learn a bit more about you and your characters!


a Rafflecopter giveaway
Posted by Em at 07:00