I have fellow Beachwalk babe Tamaria here today with her hot new release Southern Embrace. Take it away Tamaria!

Hello, and thank you for stopping by. I’m Tamaria Soana a contemporary romance author. My stories tend to be on the steamy side and always end with a happily ever after.

Southern Embrace my newest release was a very different story line for me to tackle. The story opens with Savannah my heroine trying to pick up the pieces of the broken heart her high school sweetheart Lance left her with when his family moves away the summer after graduation and he cuts her out of his life.

With some prompting for her best friend Nikki, Van (Savannah) goes out with the girls to a club and meets the handsome older Stephan. He sweeps her off her feet and she begins to heal. The stories over and they live happily ever after right? WRONG. The story is just beginning. In chapter 1 we learn that Stephan was killed in a car accident (I hated doing that). Savannah is twenty-three and the grief consumes her. Nikki her best friends steps in once again and arranges for Lance to run into her at the mall. Will Savannah give Lance a chance to explain and let him back into her life?

Southern Embrace is an emotional story about overcoming grief, forgiveness, and second chances.

I hope you’ll fall in love with Savannah and Lance as much as I have. Southern Embrace is from Savannah’s POV. I’m currently writing Southern Desire, the story from Lance’s POV. 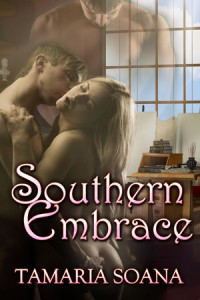 Can a long lost love mend a grieving heart?

Widowed at twenty-three, Savannah Grant is devastated and consumed with grief, a grief that she can't seem to move past. When her high school sweetheart, Lance Peterson, re-enters her life, Savannah struggles with the feeling that she would be betraying her deceased husband by moving on. Plus, she can't forget the way Lance broke her heart all those years ago.

Lance never stopped loving Savannah. He wants a second chance, and he's willing to do anything it takes to convince her to give him one. Will she give in and let Lance love her, showing her a passion beyond anything she thought possible?


It was a beautiful Friday afternoon. Van grabbed her purse and headed out to the mall. Nikki's shower was the following weekend, and Nikki had been on her to get a new dress for days, threatening to drag her shopping kicking and screaming if she didn't go herself.

Once at the mall, Van picked up some last minute gifts for Nikki. After trying on a few dresses, she found a knee-length, strapless coral dress. She purchased it and was off in search of a pair of shoes. When she found the perfect pair of coral and silver heels, Van concluded the trip to the mall a complete success.

Her cellphone rang as she was leaving the shoe store. She dug around in her bag to find it. With her head down and her steps brisk, she ran right into someone.

"I'm so sorry. I'm such a klutz," she said as she looked up into the brown eyes of her first love. She gasped and took a step back, surveying him. His light brown hair was a little shorter and he was built like a man now, not the boy she used to know. She stood frozen in place, staring at him. This can't be happening. A tidal wave of emotions rushed through her at once. Anger, resentment, hatred, but mainly pain…so much pain.

"I-I talked to Nikki. She told me you would be here. I needed to see you. When I heard what happened…" He paused. "I knew I couldn't stay away any longer. I'm so sorry."

The more he talked, the more Van's anger flared. Who does he think he is? He left me! Turned his back on me when he cut all ties!

"What exactly are you sorry for, Lance? That my husband died or that you broke my heart all those years ago?" The words she spoke were full of acid. "You have a lot of nerve just showing up here like nothing ever happened. Go away." She turned to leave.

"Please, Van, just talk to me. Give me a chance to explain," he begged as he reached for her hand.

"Don't you dare touch me," she said through gritted teeth, yanking her hand away. "What do you want from me?" She stared at him while plotting all the ways she was going to torture Nikki for her betrayal.

She seethed as he looked around. "Calm down, Van. People are starting to stare. Please, can we go somewhere more private and talk? There is so much I need to tell you."

"What could you possibly have to say to me that would make up for what you did? I mean, I know you had to move, but you cut all ties with me. Like the three years we spent together meant nothing to you, like I meant nothing to you. Damn you, Lance, you didn't even try to make it work."

"Please, Savannah. Give me a chance to explain."

"Give me one reason why I should."

"Because I still love you. I. Never. Stopped. I cut all ties with you because I had to. Long distance relationships never work out. I was afraid you would wake up one day and resent me. Being apart from you was killing me. I thought this way we would both be able to move on. But I was wrong, I never was able to move on. I let the love I have for you consume me. I wanted to come back sooner, but then I heard you'd gotten married. When I found out what had happened, I wanted to rush here and be by your side, but I figured you would need some time."

His words shocked and confused her. After she took a few moments to process everything, she shook her head. "I can't do this." She turned and walked away, then stopped. "Go back to wherever it was you came from and leave me alone."

"I won't give up on you. I won't stop trying, and I most definitely won't ever leave you again."

"Just go away, Lance. You're good at that," she snarled before she walked away. She didn't dare turn around because looking at him as he begged her to give him a chance to explain would certainly weaken her. Van needed to focus on how she was going to kill her so-called best friend.

Tamaria Soana is middle aged, but just feels her life has begun. She writes sexy contemporary romance stories that always end with a ‘happily ever after’. Growing up she loved to read and make up new places in her head to escape to. In her late teens she began writing short stories and poetry; it wasn’t until her late thirties before she began to spin a full story.

She’s married and a stay-at-home-mom of two beautiful young girls, they reside in Western New York. Cuddling up with a good book under an electric throw is her way to escape the cold Buffalo nights.

Besides writing, she co-owns Shades of Rose Marketing and hosts a talk show on Talkshoe called Live with Tamaria ~ Giving authors a voice.

Thank you so much for stopping by Tamaria! Well I have read Southern Embrace and couldn't recommend it enough. Here's my thoughts on it.

When Savannah’s husband is killed in a car crash she is widowed at just twenty three, and she is understandably completely broken. Even though I’d read a lot of reviews warning me I’d cry, I honestly didn’t think it would affect me the way it did. Within the first chapter I was reaching for the tissues, and the scene where Savannah at her husband’s grave gave me goosebumps. I was totally absorbed by the story, and I imagined that if I were in her position, I would not have had the strength to go on. It was a page turner from the start, since Tamaria managed to create such a strong character right from the word go, and I just had to make sure that she found her happy ever after. I was a bit dubious about Lance at the beginning, as the Savannah herself surely was, but after a couple of chapters you can see that he doesn’t want to replace her dead husband at all, but wants to help Savannah reach a place where she can remember her husband, but also live her own life, and more importantly enjoy it. I also loved the role that her friend played in the book, because although Lance is Savannah’s hero, it is clear that her best friend Nicki kept her going at the start.


This was a book I couldn’t put down, and even though it was emotional, it was also extremely uplifting, and it’s a story that will stay with me for a long time. If you haven’t read it yet, this is definitely one you shouldn’t miss.